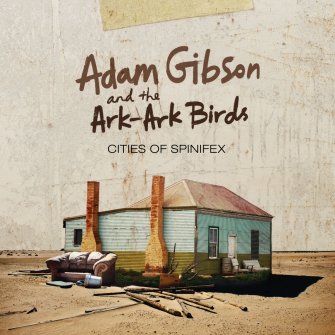 Hi team, so we can finally reveal a few more details about the upcoming album, ‘Cities of Spinifex’, and also “unveil” the new single, called ‘Trivia Night’. You can hear ‘Trivia Night’ plus pre-order the album here, with a plethora of details blah blah…

Details are below, written by our wonderful PR people, hence the “third person” tone… Their words not mine!

Today, one of Australia’s most enigmatic musical raconteurs, Adam Gibson, continues the next chapter in his storied career with the release of his latest single ‘Trivia Night,’ as well as announcing the release date for Cities Of Spinifex – his latest album with band The Ark-Ark Birds.

‘Trivia Night’ might be Gibson’s most personal song to date – an impressive accomplishment for a man whose heart-on-his-sleeve lyricism has become his widely recognised signature. The song is waltzing, folky ballad that details Gibson’s memories of some of his favourite times spent with longtime friend and confidante, the late and famed Australian columnist, Sam De Brito.

As its name suggests, the song shares glimpses of the time the two spent together competing in the great tradition of pub trivia, and the surprising memories you cherish after loss.

“It’s a song essentially about friendship and how it’s the small moments you remember when those friends are no longer around,” says Adam. “I wasn’t looking at a glib sentimentality, but more the sense that when someone dies, it’s those moments that take on great importance. It’s basically a celebration of those times and of things such as dumb trivia nights in wintertime when the world isn’t changed but which are just as important as if it was.”

It’s the second song to be released from the album, after the eight-minute opus ‘Belanglo, Byron and the Road Between’ was premiered by Rolling Stone late last year, and delved into Gibson’s chilling recollections of his life as a young crime beat reporter covering a story that would end up being linked to the horrific backpacker murders of the early ’90s.

Cities of Spinifex will officially be released independently on April 7, and follows on from the acclaimed 2015 album Australia Restless and Adam’s lauded records with former bands The Aerial Maps and Modern Giant.

The album is an aural feast – a panorama of songs and stories about landscape, travel and people, about spaces and places. Written during an intense period of personal change and flux for Adam and the band, Cities of Spinifex is a sprawling grab-bag of visions and sights, of memory and experience – of Australia and beyond.

“A lot of challenging things happened in the period immediately before we recorded this album and I wanted to capture that sense flux on the record,” says Adam. “We recorded it as quickly as possible to try to grab that sense of uncertainty and rawness.”

Long-noted for the forensic detail embedded in his songs, on Cites of Spinifex Gibson takes this even a step further, naming names and delving into personal history. He again Investigates various shades of the Australian experience, telling stories in a voice that is as distinct as it is universal. Loves, lives and loss …the cities and towns and spinifex grass and the black miles of bitumen road linking them all.