When Peter Garrett ‘signed’ my book

As a young lad growing up in Bondi in the late ’70s / early ’80s I was massively influenced by Midnight Oil. At some point in early high school my best mate Fordy had given me a double-sided cassette with Head Injuries on one side and Place Without a Postcard on the other. And as I sat there on those coastal nights, wondering about the big wide world outside, I listened obsessively to those albums and I felt my mind … changing. I felt my whole view of Australia … changing. I felt myself … changing. 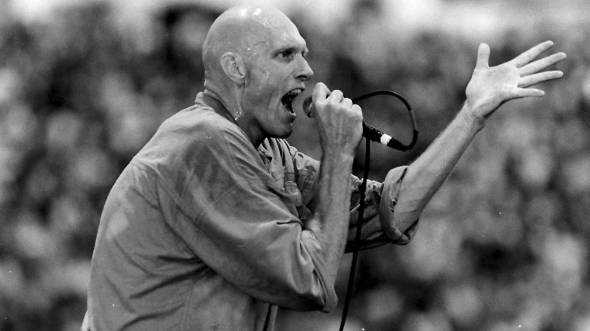 Having grown up in a family where my dad was a big band leader, I was well-versed in music, but here was a band actually talking about THINGS I KNEW. They were talking about the great mythical “long coast road” of my surfing dreams, they were talking about Lismore in the night, they were talking about frangipani and ocean-sky-blue and “the promise of a swell or a girl”. This was a real revelation to me; it fired my adolescent imagination so much and inspired me to begin my own writing. The Oils gave me the key to suddenly realising I didn’t need to be American or English to be valid – it was possible to be Australian and write/talk about Australian things and give them due credit.

So thus I began writing my own words and ideas and lyrics, at some point getting involved with bands and playing salty beer-baked venues around the place. That evolved and developed and concurrently with the band stuff I began to turn my attention towards that most uncool of artforms – poetry. I ended up initially publishing two poetry books and then began looking at a third, around the early 2000s. As I unashamedly admit that my writing began in a large part due to Midnight Oil, I thought it would be a great idea to see if I could get Peter Garrett to write a “cover line” on the book – like give me a quote that would go on the front.

Having connections deep in the Labor Party, with PG by now being the Federal Member of Kingsford-Smith, I was able to pull a few strings and get the manuscript of the poetry book to him. Then I got word that he enjoyed it and would like to meet me! Oh god. Are you kidding me?!?!? I couldn’t believe it, but soon found myself trekking out to Maroubra Junction one steamy afternoon … going to MEET PETER BLOODY GARRETT! My 13-year-old self would have died at the very thought.

And so I went up to his (pretty crappy) office, knocked on the frost-glass door, and then walked in as his secretary beckoned. She asked me to take a seat in the waiting room while “Peter” just finished a phone call. I think I was actually shaking. As I sat there, I could hear a voice coming through the thin wooden walls. It was the man himself, talking on the phone. I was so bloody nervous, mainly because here was a true hero of mine and I feared I would speak absolute gibberish in front of him.

Then, before I could really think too much more, I heard a shuffling of feet in the next room and the door swung open. That massive frame with the massively familiar head filled the doorway and he enthusiastically called, “Come on in Adam!” and he swung out his hand to shake mine

Oh shit, he knows my name and wants to shake my hand!

So I walked in and just felt like a bloody goose, so nervous and my mind a blank. His first words as we sat down were, “So tell me about the book.” And I am sure what followed was about 20 minutes of absolute blabber … I just rambled on and on and on … and all the while, Garrett sat leaning back with his hand held under his chin, those intense blue eyes just bloody well piercing right through me and those deep lines in his cheeks looking like the terrifying depths of Hades; he fixed me with an unmoving stare that seriously was the most intimidating thing I have ever seen. I was a mess, I was a gibbering fool, I was a metal wreck for cats to sleep in…

He was completely still, he did not move a single muscle as I just hung myself out to dry with what I was sure was nonsensical banter… But then, when I suddenly gained the insight to shut the fk up, he remained completely still, seemed to look even deeper through me … and then leapt forward to say “I LOVE THE BOOK! REALLY GREAT STUFF! LOVED EVERY WORD! Etc etc etc”

Oh my god. Seriously. He told me he loved the poems and really enjoyed reading the manuscript. He was more than happy to flick me a cover quote, of course, he said, and then we went on to talk for about an hour about writing about Australian subject matter, about how important such stuff was, which led to him mentioning when he was “in the band” it’s something they always tried to do etc etc. Wow wow. WOW. He was completely friendly and totally encouraging. I took my leave with another hearty handshake and walked out of there floating on a cloud
.
A day later, his secretary emailed me the quote that went on to grace the cover of the book – “Adam writes from the heart, from the street – ripper real words that are well worth checking out.”

I’ll take that, no worries!