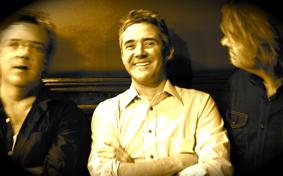 Critical acclaim for The Aerial Maps

“[The Sunset Park] is so finely drawn that is like a screenplay for your mind … an Australian classic. You must hear it.”

– Noel Mengel, Courier-Mail, Brisbane
“The Aerial Maps are surely headed for that esteemed space occupied by Australia’s finest – those whose music is Australia.”
–Justin Grey,Drum Media, Sydney
“The Aerial Maps are poised to become one of the most valuable bands in the country, illuminating a dark and mysterious Australian gothic in song.”
– Tony McMahon Inpress Magazine Melbourne
“There’s an incredible boldness to the Aerial Maps. Literally traveling from one side of the country to the other, The Sunset Park surveys an Australia neglected by so many bands.”
–Doug Wallen, Mess & Noise
“There is no other Aussie act quite like The Aerial Maps. This should be a stage show”
– Jeff Jenkins, MAG
“This reminds me of films by David Caesar (Mullet, Prime Mover); vernacular widescreen Australia with no gloss, a sense of melancholy, a road well-travelled.”
– Chris Johnston, The Age
“Adam Gibson writes from the heart, from the street, about the place that moves him most. Ripper real words that are well worth checking out.”
– Peter Garrett
“Adam Gibson looks let to join the ranks of fine Australian musical storytellers such as Paul Kelly and Mick Thomas”
– The Sunday Telegraph
___________________________________

After a hiatus of six or so years, The Aerial Maps are making a return to the live arena, bringing our blend of story and song to life once more. After a fair bit of tumult and lots of changes for the Maps, the epic Brisbane band Halfway has invited us to support them on their album launch tour, and Adam Gibson has decided that it is indeed time to reignite things … to once again take audiences on long lyrical journeys across the land, through small forgotten towns, past desert landscapes, empty beaches and into the great distance of Australia and beyond.

With 2018 marking the 10th anniversary of the release of our debut album, ‘In the Blinding Sunlight’, and following the loss of our much-loved comrade Simon Holmes last year, Adam felt the time was right to now re-spark the Maps after two albums with offshoot band, The Ark-Ark Birds. In essence, we wish to offer a new view, a different take, a path to something truly unique, live onstage, beginning with two shows with Halfway in August and September, in Brisbane, Sydney and Melbourne.

First gig, the Triffid in Brisbane on August 11. (With Halfway and Leichhardt)

Second gig, the Sly Fox in Sydney on August 17. (With Halfway and Hoolahan).

Forth gig, the Spotted Mallard in Brisbane on September 15. (With Halfway, Cold Irons Bound, Harley Young).

Halfway with special guests The Aerial Maps, plus Leichhardt

Halfway, with special guests The Aerial Maps, plus Hoolahan

The Aerial Maps became a “band” in the period from late 2007 to late 2008, where a bunch of recording sessions to put some of my words to music with my brother Simon Gibson and Simon Holmes saw things morph into something that felt good and substantial. As a result, I attached the “Aerial Maps” monicker, that had been bouncing around in my head for a couple of years prior, to the project and before we knew it, we were launching our debut album In the Blinding Sunlight, and touring Melbourne, Brisbane and Sydney. It’s funny how things work out – an album with of largely spoken lyrics meeting jangly/atmospheric/whatever-goes music is an interesting proposition. A second album followed in 2011, based on a novel manuscript I wrote, with the resultant album being called The Sunset Park. It was interesting. After many gigs and stuff, I put the Aerial Maps on ice and began playing some different, new, stuff with the Ark-Ark Birds, going on to release two albums. They’re good, buy them on Bandcamp.

So that’s that … and here is the blurb accompanying the album, The Sunset Park

Two years and many hundreds of kilometres in the making,The Sunset Park is the new album from Australian band The Aerial Maps. The follow-up to the band’s acclaimed debut album In the Blinding Sunlight, The Sunset Park is the sound of a band forging a new path, taking little heed of convention and diving headlong into an idiosyncratic and adventurous space.

Moving on from the simplicity of what made their first album appeal to so many and expanding on that template in an unexpected fashion, The Aerial Maps have virtually formed their own genre. Led by the vocals and lyrics of Adam Gibson with Simon Holmes and Sean Kennedy as the core creative nucleus, plusan array of musical guests such as Greg Perano (Hunters & Collectors) Alannah Russack (The Hummingbirds), Paul Andrews (Lazy Susan), the Aerial Maps have transformed from a band lauded for their fond folky take on life in Australia to a outfit exploring the darker reaches of the country’s psyche, the often desperate lives lived beneath the hot sun and on the edges of the wide open roads through narrative and song.

The Sunset Park is an album which spans the breadth of Australia in its content and takes the listener on a journey in a fashion unlike any other Australian (or otherwise) release we can think of. A song cycle that begins in Western Australia and ends in Queensland,it is an ambitious record, one that takes a widescreen view of the country and hums with the distance and rawness of both the land and its people. In the writing of the album, vocalist/lyricist Adam Gibson undertook a long solo journey from the west coast of Australia to the east coast, soaking up the towns, the people and the landscape along the way – the result being a record that has a palpable sense of place.

Formed in 2007, The Aerial Maps released In the Blinding Sunlight in 2008 on the Popboomerang label, subsequently playing shows with acts such as David Bride, Mick Thomas and the Sure Thing and the Gin Club. The album garnered strong reviews and various tracks, notably ‘On the Punt’, received wide airplay on various radio stations. In 2009, ‘On the Punt’ was selected for an ABC Records compilation release titled Songs For Dadand in 2010, Blinding Sunlight was named as Best Spoken Word Release 2005-2010 at the Overland Poetry Awards in Melbourne.

The album can be investigated further (and bought) at www.theaerialmaps.bandcamp.com

And a live review of the Sydney album launch of The Sunset Park…  all those years ago.

4 Comments on “The Aerial Maps”