Come celebrate with us at The Toff in Town in true Going Down Swinging style, with a performance showcase of some of Melbourne’s best artists.

Ten years ago, Sydney’s Adam Gibson wrote a heartfelt dedication to Melbourne and Frente singer Angie Hart, published in GDS. Ten years later, Angie has written her reply, for a very special GDS performance commission to be debuted this very night.Adam will also be there, to perform his piece alongside its catalyst. The wonderful Cate Kennedy will read from her GDS-commissioned short story, while blues-soaked spoken word artist Benezra presents a commissioned performance piece that could fall anywhere between murder ballads and hip-hop.

Last year’s corresponding event sold out in quick time, and our June warehouse party was packed to the rooftops. So be sure to book in advance to secure a spot for a night of class.

Each ticket comes with a copy of the newly-minted GDS #33, featuring a collaboration between Cate Kennedy and artist Simon McEwan, a stunning commissioned essay from Briohny Doyle, and a radical new design from Santangelo and Hall. It will take you from Thailand to rundown apartments in Minneapolis to the depths of the ocean to a run-in with Czech border guards. Andre Dao contemplates Catholicism and mourning, Paul Adkin looks at 9/11 translated by Edgar Allan Poe, and Michael Trudeau leaves you speechless with his take on aimless masculinity.

Our CD includes a newly-recorded version of Tom Waits’ theme from The Wire, covered by Darwin soul stars Sietta; alongside 2011’s performance commissions by Mantra and Felix Nobis; alongside new work from Joe Dolce, PiO, Emilie Zoey Baker, and The Bedroom Philosopher.

Come help us launch this beauty!
Tickets: $25 (includes a copy of issue 33)

Exhibition – ‘This Land of No Horizon’

My solo exhibition, ‘This Land of No Horizon’ … the details: 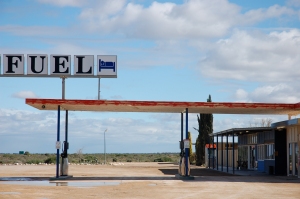 ‘This Land of No Horizon’ is an exhibition by Adam Gibson of photographs, videos, paintings, objects, other bits and pieces addressing the idea that Australia is so big, the horizon could almost be said to be “never ending”; as if it is only the limits of our own vision that creates an ending, whereas in reality, the land stretches on (seemingly) forever. Thus, there is a sense of never quite being able to know the landscape, as if this country really is a “land of no horizon” and therefore is a place holding the associated mysteries of that “unknowing”.
The work in the exhibition explores various aspects of life in Australia, particularly a concept of the relationship the population has with the vast landmass that lies “out there” and how that can affect us, whether consciously or unconsciously. That landscape, and the attendant history of both Indigenous and European cultures, exerts a weight on modern Australian life and that space and history echo through many aspects of Australian culture every day. How do we live within such a country? How do we locate our place in such a landscape? Nostalgia, remembrance, forgetting and unease …

Here are some images from the exhibition, which was amazingly successful, with a great opening and general attendance: