The Opera House and I 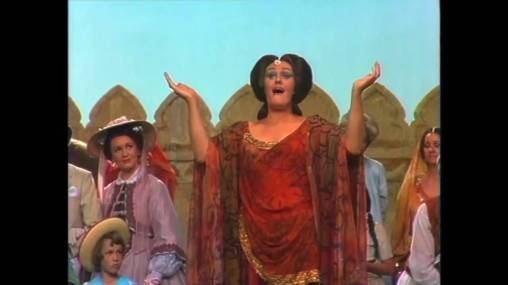 I was in an opera with Dame Joan Sutherland. It was Lakmé, performed at the Sydney Opera House in the late 1970s, just before she was actually made a Dame. I didn’t sing a note. I stood onstage dressed as “Chinese Boy” whilst the great coloratura soprano took the lead role. I remember her head being a massive edifice of fixed-tight hairsprayed hair, seemingly as solid as hardened fibreglass. Her costume was equally elaborate; a massive bust embroidered, in both reality and in my memory, with intricate scrolls and patterns. Her image is fixed in my head as this gigantic perfumed operatic monster, a ship that seemed to move with the steady assuredness of the Queen Mary, with an equal sense of the wisdom of getting the hell out of her way if she was approaching.

I was eight years old. The Sydney Opera House stood as the pinnacle of Australian culture. Only having been open for a handful of years at that point, it was (and still is) the only real place in Australia that seemed to hold the true devastating mystery of the entertainment world. In his position as one of Australia’s most well known big bandleaders, my father Bobby Gibson had spoken of the Opera House in such a fashion and the awe and wonder of the place was transmitted down to my brother Simon and I. Those strangely long but small steps; that grand sweeping jut out into the harbour, those magnificent “sails” and the cold off-white tiles that seemed to hold something grand and historic in their smooth-to-touch feel. This was a place where Things Happened, where the Great Magic of Entertainment lay.

My brother and I hung around the Sydney eisteddfod scene in those days, venturing all over town as kids did their best performances in shopping centres and community halls from Bondi to Burwood and back again. As a talent agent, our mum was also involved in all sorts of television shows and TV commercials and stage shows and every year at the Sydney Easter Show at the Sydney Showground we based ourselves at Joy O’Neill’s Daffodil Theatre, just near the main arena, down a bit from the famous Tasmanian Hot Chip stand. Simon and I, and our friends, were often to be found on stage performing in some form, or else we were haunting the rest of the Showground with the Goodman girls, scamming free rides on the Cha-Cha or Wild Mouse or Ghost Train or Matterhorn by saying, “We’re Showies, can we have a ride?” So when it came to the casting of kids for Lakmé, we were at the front of queue. Not that there was really much of a queue. Things just happened then. Showbiz? Yeah, why not. A role in an opera with “La Stupenda“, aka the soon-to-be “Dame” Joan Sutherland? Yeah, why not?

And so I found myself being cast as “Chinese Boy” in Lakmé. This was the late 70s and whilst there were obviously real Chinese boys in Sydney at the time, it was absolutely not an issue for a completely Caucasian boy from Bondi to be cast in the role. No one seemed to think that there was any problem with that, not one iota. And thus so I further found myself, with my mum, dad and brother, deep in the bowels of the Opera House, sitting for an hour each time in the make-up chair pre-performance, the smell of the thick make-up and cold cream and cigarettes and heavy 1970s aromas emanating from devastatingly beautiful opera singers and other cast members. The women lithe in the flowing robes the “Oriental” theme of the opera demanded, with dark mascara and heavy eye-shadow across their faces; the men, huge handsome figures with booming voices and an air of ancient solemnity mixed with a pheromonic base note of all the sex I’m now sure they were all having.

Onstage, the lights shone brightly into my eyes, the huge audiences filling the Opera Theatre, the hustle-bustle backstage of the crew moving gigantic backdrop scene structures. And in the arc light of the drama, Joan stood like an immovable mountain; like dead-set Mount Everest, the sheer force of her voice eviscerating the dreams of any of the other singers who thought they may come close to her. I recall one of my tasks involved having to stand at the rear of the stage, near a pylon, stage left, and at a certain point having to move forward with some sort of item, which I cannot now specifically remember – perhaps a box with a trinket inside – and place the item on a table near Dame Joan. I did this on the instructed cue, and every night, the sheer terror of the moment nearly made me freeze but, every night, I managed to do it, walking forth into the direct, silent, gaze of La Stupenda, placing the item, then retreating slightly while she regarded me with a stare that contained all the great power of European operatic history and drama and death and struggle and the beauty of all humankind. And then she’d look away.

Backstage and down in and around the legendary performers’ “Green Room”, myself, Simon, and a bunch of other kids who were also in the cast ran absolutely amuck in the hushed and magnificent labyrinth of corridors and rooms and deep hidden places that lay beneath the bedrock of Bennelong Point. I recall the plush carpet, the low ceilings, the pale wooden doors with brushed metal handles, each with a code indicating some information about the room’s role, which we could never decode. We had complete free run of the place. During long afternoons between the matinee and the evening show, we would find our way into places that I am certain Jørn Utzon didn’t even know existed. We’d take that corridor this way, then this one that way, and find ourselves behind false backstage walls of the Concert Hall or the transport loading dock or the kitchen, ancient security men not bothering too much with security and cleaners finding a hidden room in which to have a ciggy and maybe a bit of a nap. Oh what a superb subterranean world, a great incredible mysterious place for a bunch of kids dressed in fancy dress and performing before or later onstage with one of the world’s greatest ever opera singers.

Life moves on, you travel overseas, you come home again, you fall in love with someone, then they fall in love with someone else. You get older and your memories bury themselves somewhere just below your breastbone or form as an ache in the hip that just won’t go away. You remember things just as quickly as you forget them before remembering them again, just in time before they’re gone forever …

And so, a little while ago my brother and I had the opportunity to go and see The Whitlams play a show in the Concert Hall in the Opera House, backed by the Sydney Symphony Orchestra. I hadn’t been inside for years, even though I’d always looked at that superb building whenever remotely close to it. As my ferry rounded Bennelong Point from the east, I again looked up those truly magnificent sails and felt that same frisson of excitement I’d felt all those years ago when I gazed upon the building. I alighted my ferry and walked past the thronging crowds at the restaurants beneath the Toaster and made my way towards the venue. Every feeling again returned; I ascended those tricky low steps, felt my feet on the plush carpet and, as I approached the ticket counter to pick up my tickets, looked to my left and saw an unmarked door. It all came back to me. At eight years old, I knew that door well. It was one of the many that led into the mysteries within. I looked around and, despite the crowd, nobody noticed me as I walked towards it, just to see if it was unlocked. I placed my hand on that brushed metal handle, pushed down, and yes … the door creaked open. I could easily have slipped in, gone inside, gone underground. But I didn’t. I pulled it back closed again and continued upstairs to meet my brother, simply happy to realise that such doors to the past do sometimes remain open.