Following on from the ‘Australian Signs’ instalment of yesterday, I bring ‘Call and Response’. This is how a community works, how things exist below the level of the headline news, below the official history and the verified narrative of the days. On the same street pole, days apart.

Two sides of the coin, and I hope they connected (click on the photos).

The story of a nation can, in part (or in whole?), be told in the signs its people write and put up for display, I believe. The petty, the pedantic, the misspelt, the misguided, the genuine and the juvenile … read the arc of a nation’s psyche in the signs upon a wall, upon a street.

Vast areas of inland Australia, which once echoed with the shouts and sounds of thousands of people, now stand empty, abandoned and deserted. The factories are full of ghosts, the sheds and fields sitting desolate under the silver sun. A woolshed in Fowler’s Gap, in the arid zone a few hours north of Broken Hill, is one such place.

‘The Abandoned Woolshed’ from Adam Gibson on Vimeo.

‘Idea of a watercourse’

#5, ‘Idea of a watercourse – one-minute sketches’

A potential sub-genre of 30 Days of Summer … the one-minute sketch.

I am thinking about Australian watercourses and the flow of water across the landscape. Working on a larger painting in that regard but for now these are some (less than) one-minute sketches with soft pastels around the idea. 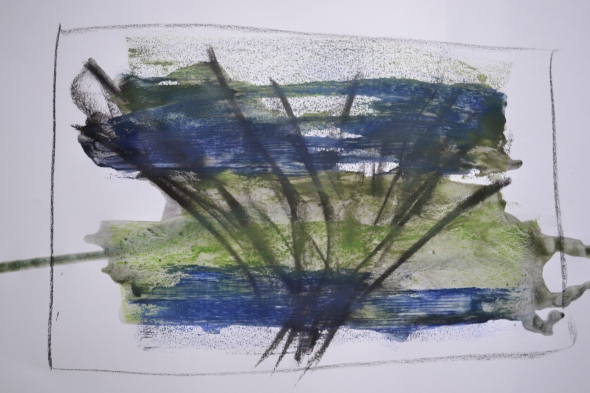 Place Without a Postcard, Midnight Oil:

As a boy growing up in Bondi, Sydney, my life consisted of surfing and playing or watching rugby league, of roaring around on the rubbish-strewn seaside streets of Bondi, of (watching) fights in the schoolyard at Dover Heights Boys High…

But in the early ’80s something else crept into my world. A few of the older guys started to paint a strange “hand” symbol on their surfboards and talk about this band called Midnight Oil. Soon afterwards I was lent a cassette by my mate Fordy, one side of which was Midnight Oil’s second album Head Injuries and on the other, their third, Place Without a postcard. I began to play both of those sides every single day.  And I mean that … EVERY SINGLE DAY.

Whilst I loved a lot of the songs on Head Injuries, it was Place… that really struck a chord with me. The fact that the band were singing about “Australian” things in an Australian accent was a complete revelation to me. They were talking about backyards, barbecues and eucalyptus smells and clotheslines … I couldn’t believe it: here was someone actually talking about our world, about MY world, and after that, my life was never the same.

That album gave me a vision about what I wanted to try to do with my life: that is, to try to articulate similar Australian stories, Australian lives … to give due credence to our histories and not shy away from celebrating matters Australian.

Not in a way of glib patriotism, but in a way that underlines the value of our own experience. So, i say thanks to Midnight Oil for giving me that. 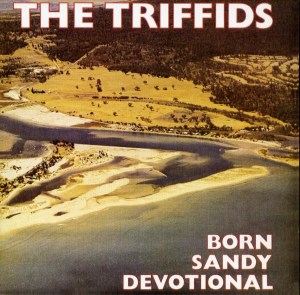 Slightly later than Place Without a Postcard, I remember hearing vague things about The Triffids. They hadn’t really entered my world however. They were from Perth and whilst my Dad was born there, seemed to be from so far away that I didn’t really notice them.

However, like a brewing thunderstorm cloud that first appears as a small smudge of grey on the horizon, the band would soon engulf me. And that first small smudge came when I heard ‘Wide Open Road’ on Triple J, then Sydney’s only alternative radio station.

I think I must have heard it again and felt … something … because then I went up to Bondi Junction and bought the album. Again, life changed.

Here was a band which spoke of a particularly Australian distance and space and light. Here was the first band that I had heard which captured that sense of space that I felt had been lodged in my psyche since I was a child, a band that articulated, somehow, that sense of distance that even the most city-dwelling Australian feels lies out behind our world.

It was as if the Triffids had somehow captured actual rays of sunlight and put them in between the chords of the songs. And equally, behind those rays of sun, there were the necessary shadows to give the whole thing true and incredible power.

Coupled with Place Without a Postcard, which spoke of more of a coastal world, Born Sandy Devotional (best album title ever, by the way), in it’s widescope vision of Australia’s Outback and heat and empty desert roads, made me feel like there was something about Australia that was very important to believe in and revere.

Talking to the Taxman About Poetry, Billy Bragg:

In Bondi, from the late ’70s and through the ’80s, The Clash ruled. Punk in general had a reasonable impact on the surfing community, but while the Pistols were appreciated and various other punk bands celebrated, it was the Clash who were loved.

London and her grimy streets and train stations may have been a world away from our life on the beach in Sydney, but in a metaphoric sense, growing up in Bondi, we really could see a connection. Bondi was (and is) an intensely urbanised world and whilst not a “big city” like that which spawned punk in London, we did genuinely connect with the disaffection the punks were expressing. Maybe that was because at that time, surfing was still regarded as a marginal activity and hence we related to the world as “outiders” …? Possibly.

Anyway, so the Clash had a big impact, and then later The Jam did as well. And my brother and I, by then eagerly soaking up a variety of music from around the world, but most of it heavy on guitars and attitude, were aficionados.

And so it came to pass that in, well it must have been maybe 1984, read a review of Billy Bragg’s album “Talking to the Taxman…” in Tracks surfing magazine. There was one line in that review that got us hook, line and sinker.  The review could have said the album was the worst thing ever produced (it didn’t), but we didn’t care. The line “Bragg is the acoustic Clash” sold us. We went and bought the album the very next day, and we were sold. Billy’s wonky voice, weirdly metallic guitar, wild and seemingly discordant strumming … it was all there; and so was, we quickly realised, a batch of songs that made us think and laugh and honestly see the world in a different way.

Billy spoke of “ideologies clashing” and there being “power in a union”. He spoke of the worker and worker’s rights and, although we lived in a fairly middle class house in a fairly middle class area, we saw something very important in that. Add to that a widescreen view of anti-imperialism/Americanism, and you have an album that, ideologically, lyrically and sonically changed the way I thought, both about music and also life.

And it also began an intense passion for Billy’s music that has continued ever since … one of the greatest performers I have ever seen and a huge influence.

#3, ‘Luckiest Country – There’s a Feeling I Get When I Look to the Sun’

A re-working of the Oils.

luckiest from Adam Gibson on Vimeo.

It occurred to me yesterday, in discussion with a friend, that the “colour of Australia” is a washed out one, a faded one. It’s not the actual colour that is important, rather the haze of fade that is cast across that colour by the sun, the sun, the sun.

This is the taste of it, with the future holding promise of more thoughts along those lines.

In Ho Chi Minh City (aka Saigon) recently we found ourselves walking the hot streets in need of some refreshment. And so it was that we wended our way to a small roadside cafe that my brother Simon was familiar with in District 1, up near the Notre Dame church.

Serving up a no-nonsense menu of tear-your-head-off coffee (hot or on ice) and simple pots of tea, it was a cafe the likes of which is found all across Vietnam. A family operation with no-frills attached whatsoever. Tiny plastic stools on which to sit, the footpath beside the road being the dining area and service done with a swift, no-nonsense awareness that you just want a drink and not to find out how the barista’s latest film script is coming along.

On this particular day, I opted not to partake of a Vietnamese coffee (aka “an anxiety attack in a glass”) and just had a soft drink. However, the owner, a comely woman of about 60 who wore the fetching pyjama-like matching pant and top attire so beloved of women of her age throughout Vietnam, was insistant that I have a hot drink of some description. Thus I was served a small pot of steaming jasmine tea (in the 30 degree heat).

In the end, the tea went down a treat, but it was the teapot in which it was served that most caught my attention. A battered little silver/aluminium thing, god knows how long it had been knocking about at that cafe. Carrying the signs of age that no intentionally “distressed” item could, I imagined all the hands of all the people who had used it over the years. It could well have been there for 10, 20, god knows, 30 years. Who knows? It could have been there when Saigon fell to the North Vietnamese forces in ’75, the tanks busting through the gates of the Palace, as Neil Davis filmed inside. Who knew?

I didn’t. But what I did know was that, importantly, that teapot had a bloody great “pour”, ie. with the tilt of the pot, the contents felt perfectly balanced and out flowed a perfectly weighted stream of liquid. A physicist trying to invent a calculation for such a thing had nothing on the unknown maker of this little baby.

So, yes, I was very taken with it, and wondered aloud to Simon if I could buy it off the woman. Simon said she probably would sell it and I was more than prepared to pay a few thousand dong for it; it was a beauty. Anyway, I drunk my tea and briefly went to check out the next door clothes store.

Whilst inside, however, I saw Simon call the woman over. He held the teapot in his hand and appeared to be asking her in Vietnamese if she would sell it. The woman looked completely perplexed and it wasn’t because of any lack of proficiency in Simon’s Vietnamese… I later learnt that she couldn’t understand why the hell anyone would want a crappy old teapot that had been used in a roadside cafe for years and years. Such a concept was a mystery to her.

But anyway, a short while later I came back out to my plastic stool, whereupon I was presented with the object of my desire … the teapot. The woman had rinsed it, put it in a plastic bag, and was now handing it over to me. I tried to give her some money, but Simon said she wouldn’t hear of it. “You can have it for free,” she apparently said, or words to that effect.

So there we have it. I got my battered, scuffed and beaten up teapot (with the perfect pour). I brought it back to Bondi and, after a decent rinse, have been enjoying some pretty damn succulent cups of tea from it. And, thus, here it is…