Things are getting weird out here on the edge of town.

An old frame, found on the street that I grew up on.

Painted over, a ghost of a memory of what was there before.

Who threw it out, where has she gone?

Without necessarily intending it to, this painting actually “moves” when you look at it. I don’t know how or why, but it just DOES!

Some years ago I painted this series of paintings. They were part of an intended wider work focussing on Australia’a arid landscape.

That wider work hasn’t come together cohesively yet, but collecting these paintings here and now for the ’30 Days of Winter’ project may spur me to develop that idea further. As it stands, here they are. Click on them to enlarge.

This is a series of three “pho-aintings” based on images from the Nullarbor Plain, in the Australian Outback/desert.

What is a “pho-ainting”? It is my newly-invented word for works that I have done which are based on printed photographs. These prints are then fixed to a board, or other surface, and then painted and otherwise worked-up, often coated in resin or lacquer to create the final product.

This particular series has three images, all A1 size (841 mm x 594 mm) and feature three depictions of the Nullarbor Plain.

These aren’t quite finished yet, but required a fair bit of work today and thus this work covers Day 8 and 9 of ’30 Days of Winter’! 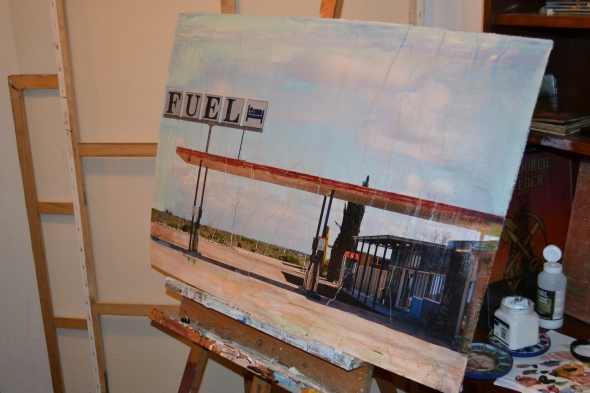 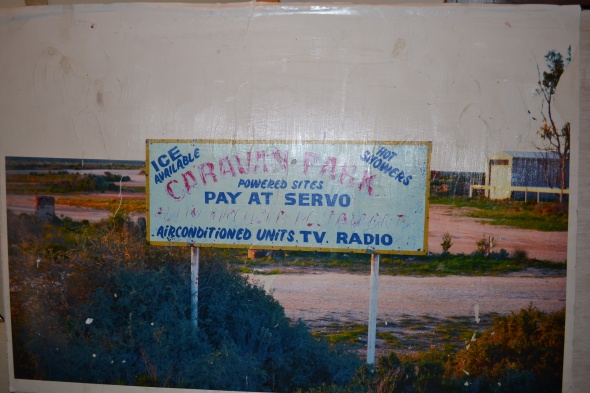 ‘Going to the Sauna of Lonely Hearts (Haukijärvi, Finland)’

‘Going to the Sauna of Lonely Hearts (Haukijärvi, Finland)’

Another Finland-inspired work. Created whilst in residence at the Arteles Creative Center.

This work has a lot of resonance for me, but I will not over-explain it. It stands as it is, cold seeking warmth, harsh seeking comfort, onward.

This is a painting, which belongs to G* as I gave it to her for a birthday several years ago but am keeping it in safe hands, I did of sugarcane, thus.

My earlier visits gave me the impression of a great city, my wanderings leading me into some amazing places and some unbelievably chaotic nights on those Catalan streets.

On the most recent occasion I enjoyed similar wanderings, albeit without quite as much madness. Unfortunately. Oh there was one night, St Patrick’s Day at a pub … but anyway.

Anyway, I also had the sense this time that the city was just too overrun with tourists. Whilst I was one of those myself, I just found the hordes to be oppressive and that they obscured what was left of the true local culture.

Anyway, in 2007, I did some sketches of some places I saw. Below are two of them. That is all. 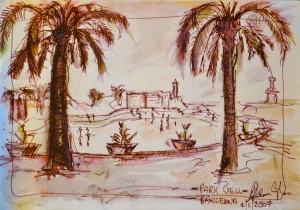 A friend Suzanne and I were talking about life and art and other things, including nudity, and how despite the fact that it’s our natural state, you rarely see too many other people naked (unless you live at a nudist colony or near a nude beach or have a far more exciting life than most people).

Suzanne said, “It’s like we are all always constantly wearing this mask to hide ourselves”.

I said, “well we also need to keep warm.”

She said, “Yes but our nakedness is still there under our clothes and I like to think of that as a good thing, as a precious thing. When you think of it like that, you can realise how pleasurable it is to reveal that precious thing sometimes.”

That got me thinking. I said, “You mean like a precious piece of jewellery that is revealed on certain occasions?”

I then mentioned that I had an old box that a ring came in and was trying to think of a use of it for an art project. Her eyes lit up, and she proposed to pose nude for a photograph, which could thus be placed in this box as a precious item.

A lightbulb lit up and we decided we’d try it, with Suzanne modelling nude but with a mask held over part of her face, the opposite of what occurs when we walk down the street with our face exposed.

The art of the fridge magnet is undervalued, I believe. There is a particular type of fridge magnet common in Australia; small clear-plastic/resin(?)-coated ones with (usually) brightly-coloured semi-cartoon images on them, depicting scenes or emblematic features of the particular town or region they are commemorating.

These can be found in giftshops and service stations and general stores and on fridges all over Australia. To me, they seem to capture a lost utopia, an ideal vision of a particular place captured in time and frozen in miniature; the little fisherman casting his line on a golden beach, a sawmiller standing on cartoon logs, a mysterious gold miner depicted against the backdrop of the diggings.

In an Australian sense, I feel these utopic representations are a symbol of a striving to give the places depicted a deeper history, to officially stake a claim for the European connection to the land. These ideal visions look to sink roots into the country and offer a “knockabout” and easily digested snapshot of how a particular area sees itself (and how it wants itself to be seen).

But I can’t help thinking that behind a lot of that sentiment, behind those sunny smiles on sunny shores, lies a darker tone, one that seeks to subjugate  that land and place, assert control over it, in the face of the fact that at a fundamental level, that land and the people who once “owned” it had to be conquered.

That idea, combined with the fact that a vision of utopia necessarily excludes day-to-day reality and dreary thoughts of taking the rubbish out and/or getting skin cancer, makes me see these magnets in a very different light to what I am sure their makers intended. And who made them anyway?

Oh, they’re just fun fridge magnets! Get over it!

Here is an alternative reading of them, of the history of such places, regardless.

This video was based on these some of these images, below, which were created out of enlargements of actual fridge magnets. These enlargements were bonded to plyboard with resin, painted in parts and coated in resin. I see this project as opening up the images on the magnets and delving into them, finding the shadows behind the scenes, the sound behind the silence of the picture postcard depictions. Etcetera.

The ocean around Shark Bay in South Australia is home to one of the largest concentrations of Great White Sharks in the world. Not far down the road is the Great White Shark Museum and many surfers, divers and swimmers have had “encounters” with the creatures.