Kenny was one of our crew. One of the fellas. One of us. A brown-skinned nugget of muscle and sinew, the fittest bloke you ever saw. He was part of a long lineage of Third Ramp blokes who hung at that particular spot on the Bondi promenade and surfed and played handball and made themselves a menace at a time when everyone at Bondi mostly grew up there and knew everyone else. My close old mate Platty introduced him to my brother and I and we became firm, close friends.

He had a surfing style that reflected his tightly-wound physique; little finesse but a mad muscular wave attack that at least in part corresponded to his often twitchy, tightly-wound (but always friendly and funny) on-land personality.

He favoured tight camouflage boardshorts, loved how Tommy Carroll surfed and had a turn of phrase that could eviscerate a try-hard or a blow-in in a single growled sentence.

In an era and at an age when hedonism was worn with a badge of honour, and the pub just as much as the surf was your proving ground, Kenny gave as good as anyone. A cutting sense of humour, a charmer of the opposite sex when he wanted to be, a great travel companion and an even better drinking buddy.

The morning after a long mad party at my mum’s place up in the valley, where various people lay in drunken repose at various locations, including the front garden, of the old semi …

I can picture Kenny right now twisting the top off a VB and joyously imbibing. No worries at all.

But these were the days. The long summer afternoons of the mid to late 80s and into the early 90s. An era of our respective lives when Bondi was still resolutely “local”, before all the old families had been pushed out and if you saw someone with a surfboard near the beach, you would almost certainly know them.

These were hot bitumen-under-feet days, Oakley sunglasses days. Entire weekends being spent with a revolving but tight gang, moving from the promenade to the sand to the surf to pub and back to someone’s rented house or dilapidated flat and cases of beer arriving somehow and the music being cranked up or the guitars being pulled out.

And the music. Oh the music. It was the Clash first. London had called to this faraway town called Bondi and we lived for them. The Clash ruled, they were our guiding light, to quote my brother. They gave us hope and gave us light and infused in us a sense of possibility and endlessness which many of us have only in recent years began to realise may not actually exist. We knew every word to every Clash song and barbeques on Kenny’s rooftop of the old Shangri-La block of flats, next door to the now-demolished (of course) Diggers Club, where he lived were long sessions of Clash dissemination.

But Midnight Oil too of course. ‘Run By Night’. A world captured in a song, an echo of long coast drives and and runnin’ and chasing waves and girls and all the possibilities of surf and music and early 20s and an era of Australia which also echoed with encouragement and possibility.  We lived for “Powderworks”, we lived for Head Injuries and “Place” and “10 to 1”. We could see the outside world, everything was inviting in the outside world.

Kenny sung ‘Run By Night’ in my brother’s band The Few and once when they played at the Racecourse Hotel in Randwick, Kenny decided to bring along an orange boat flare from the marina he worked on, and we decided to set it off in the venue about the size of a postage stamp. People ended up running for their lives, their mouths pinned to cracks in metal-barred windows trying to catch a breath as the Fire Brigade and Police swarmed Alison Road, about to be asphyxiated themselves…

There was V Spy Vs Spy too of course. A key and integral band. I can see Kenny tugging on a ciggy and his mouth singing the words to ‘Clarity of Mind’ or ‘Don’t Tear it Down’ and more, many more. Big Audio Dynamite massive, life-changing, the first two albums cranked up as we dissected the lyrics and guitars for reassuring hints of the Clash in Mick Jones’ playing, lyrics and delivery.  The Sunnyboys naturally too. The first album. The Buzzcocks also. The first album. More. Many more. 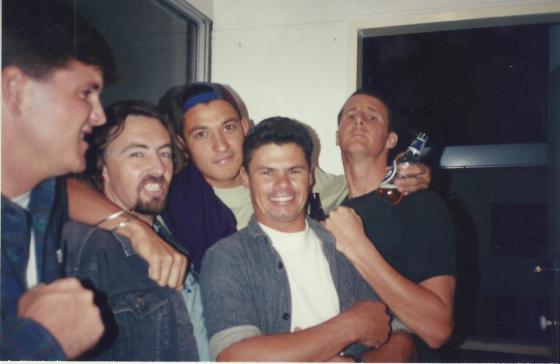 Oh how we gathered for songs and beer and pizza in the old beachside huts and ruled a Kingdom of Salt by the sea of our battered old coastal town, where no one wanted to live as the shit smell wafted down from the sewerage works with every nor’ easterly and the shit itself came in on the tide in every sou’ easterly.

Oh a Kingdom of Shit, but our kingdom, passed on from the generations above us, those who still lived in the brick veneer valley and cast their eyes on us younger generation, making sure we didn’t put beer glasses on the sides of the exquisite snooker tables in the strictly-ruled snooker room at the Diggers or ran too amuck in the Rasa Restaurant.

But these were the years when no one really cared what you did either. You could do whatever you wanted. You could work in bar or travel up the coast for years or go and live in G-Land for six months and come back full of stories and then head off again once you’d saved enough money on the “Government Surf Scheme”.

Kenny was here. Kenny was in his G-Land Surf Combat cut-off t-shirt. His cammo boardies, his Oakley sunnies, now having taken to bike riding with a vengeance. He would ride to Wollongong and back just for a morning ride, just for the hell of it. His physique as taut as a snare drum, he looked like a hard little walnut.

And the beers went down and the years began to pass, and he remained so fit looking. But we were young, we were doing our utmost to live every second for ourselves and if we saw the signs at all, we didn’t know what we needed to do with those signs.

Everyone was “on it”. In our crew it was never really drugs, more just booze. Surf trips and booze. Burleigh Heads and booze. Byron and beers. It was all ok, no one saw a problem.

But the drum began to seemingly wind tighter and tighter and whilst we’d kind of joke about it, something was happening within Ken. Most of us could leave the booze alone after a big weekend. But one night, a Tuesday, when I bumped into Kenny returning from the bottlo with a case of VB, a small alarm bell must’ve rung but I was too young and silly to hear it.

Something happened with the flat he owned at the Shangri-La … we don’t know, whatever it was is now lost in a salt mist. But then there was a flat up on Ramsgate or Brighton, and continual and growing stories of some argument with an upstairs neighbour about music being played too loud. Trouble was brewing. Someone visited Kenny and said his walls were all painted black and the place was a mess.

We grow up, we try our best, and as Bondi changed, many people began to move away. The sense of community that many of us once felt was fast disappearing and whilst some of us were able to withstand that, many others weren’t. Kenny was one of these people, I believe. The “trendies” were coming in and everything was suddenly different. It was no longer okay to play the Clash at full volume in your flat. It was all different, people had moved on. Girlfriends came and went for Kenny and something began to change.

A schism occurred and many of us seemed to lose track of different people. Some couldn’t seem to handle the change. They “moved inland, got a job, the whole damned thing”, to quote our favourite movie, ‘Big Wednesday’.

And it was somewhere here that we lost Ken. A phone call missed here, a catch-up not caught there. From being someone who was with us every Friday night, he drifted away.

I can’t say exactly when it happened, but it did. And we did try to reach out to him, to give him a call, to see if he was ok. But he pushed back, he swore at some of us when we rung his mum to see where he was. He didn’t want to know that we wanted to know about him. He didn’t want to know about Bondi anymore. The place was “rank” now, to use his expression. Too many yuppies, too much noise and crowds and tourists.

Who can say how all this really occurred. And if there is anything we could have done. I simply don’t know. I simply cannot say. We would’ve tried to understand if we’d had the actual ability to understand. But we didn’t, no one gave us a guide on this.

But I do know that for the past 15 or 20 years barely a day has gone by that I haven’t thought of Kenny and wondered how and where he was. In that time, I was always, for some reason, completely confident that he was alive, but that he just didn’t want to contact us. That was fine. That was ok.

We’d heard of the odd unconfirmed sighting here and there and we just assumed that he was getting on with his version of life and whilst it hurt us that we’d lost touch with him, we were at least content with the fact that he was doing what he wanted to do.

Which was, of course, drink. And drink some more.

When I heard today that Kenny died almost a year ago from booze-related stuff, mine and many others’ hearts broke.

A Bondi tragedy. The oldest story in the book.

In those Oakley sunnies.

Twenty years ago or more.