← ‘Australia Restless’ – video to the song
Another Bondi shyster → 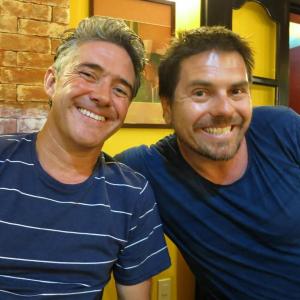 It’s 3am when it hits. That end-of-the-world feeling. That feeling that everything you’ve done in life isn’t right and that everything you’re going to do henceforth is going to go down the wrong path, for sure. At 3am, on a humid Sydney night; at 3am, on a cold Paris night; at 3am, in Bondi, when the fireworks have not long finished banging and the world is telling you how “good” everything is. And, yet, you feel bereft.

It was on just such a pre-dawn morning about five years ago that just such a feeling swamped me like a groundswell set of waves on my home beach of Bondi. And it was on just such a 3am morning when I frantically searched my phone for someone to call who could, somehow, hopefully, help me through. Brother overseas, wrong time zone. Mother, up the road, don’t want to worry her. Childhood mate, newborn baby, can’t wake him. Who else to call? I scrolled down my phone to “S” … and found the necessary name – “Sambo”.

And so I called Sam de Brito and he answered and we talked. He wasn’t startled I’d rung; we just chatted as if it was any normal call. The problems of the world weren’t solved, nor were the ones in my life. But the fact is, he was there. And in those circumstances, that’s all that ultimately mattered.

I first met Sam when we were copyboys at News Ltd in 1989. We soon gained our journalism cadetships at News Ltd and proceeded to dive into the cut and thrust world of Sydney newspapers of the time. Sam was always a charming figure with a sweep of artfully tossed straight blond hair, sharp suits with pleated pants and narrow leather ties, Sam always having his top shirt button undone so his tie could hang in a decidedly louche fashion.

What was forged in that fire of midnight-to-dawn shifts, of chasing stories across Sydney, of late nights in smoky pubs watching long forgotten bands, was a deep friendship. A friendship based not just on the easy banter of young twentysomething talk of footy and women, but on a deeper level of human engagement. About philosophy and art and the argument about which was the best Pixies record. Sure we talked about footy and women too, but that was always secondary to the search for something. Something more interesting, something more important, something to make life worth it.

About a decade ago, I bumped into Sam at North Bondi, he having emerged from a run and a swim and me heading down to do just the same. I knew he’d been struggling to write the novel that he’d always wanted to write and after many many conversations about it, when he spoke of his struggle on this occasion, I sort of lost it at him.

He was torturing himself with philosophical musings and theoretical positions. So I said, “Mate, just write the bloody thing. Write about us, write about growing up in Bondi, stop over-thinking it.” Within a year his first novel The Lost Boys was published and he always told me, and mentioned in the forward of the book, that it wouldn’t have been written if I hadn’t said those words.

But if I could have some modicum of influence on him, he more than made up for it in return throughout later years. As a confidant, as a sounding board, as a mate. It was in these later years that he became a columnist for the Sydney Morning Herald and The Age – a forum that allowed him to reach a far wider range of people and which afforded him both fans and critics alike. The one thing that Sam never shied away from was a good argument and whilst he held strong opinions, they were always informed opinions, based on thought-through ideas and concepts grounded by intensive reading of canonic and popular texts. He was no Google Philosopher – he knew his stuff.

Having strong, well-articulated opinions, and not being afraid to publish them, is, however, like having a target on your head in this era. And Sam wore the shots from many. He was accused of being sexist, misogynistic, arrogant, ignorant; a dumb yobbo and who was “just a stupid bloke”. But anyone who knew him personally knew that such perceptions were in no way the measure of the man. The Twitter heroes and the two-bit intelligentsia knew nothing of the man. And to see him belittled and mocked by some commentators and members of the public who, at a guess, did not have an ounce of the goodness of spirit and intent that Sam had, pissed us, his friends, off no end. He was never malicious and always sought to make the world a better place, as clichéd as it sounds, through his writing.

But I guess that’s the nature of friendship. You feel your friends’ pain when they are feeling pain and you feel their happiness when they are feeling happy. I introduced Sam to the woman who became his partner and the mother of his child and their early happiness, and eventual joy about the raising of their child, was something that as Godfather to that child made me equally joyous.

I can’t write this any more, I have no words, I need some advice on where to turn with the next sentence. But now, today, at 6pm on a lovely Bondi evening, after a storm has just cracked across town with lashing winds and hail, when I would more than likely see Sambo walk past my window on the way to the beach with his beloved daughter Noush, I need to call Sam … and he’s not there at the end of a phone line. Sam died today.

Thanks for all comments, I will try to respond in time. Much appreciated – Adam Gibbo