In Ho Chi Minh City (aka Saigon) recently we found ourselves walking the hot streets in need of some refreshment. And so it was that we wended our way to a small roadside cafe that my brother Simon was familiar with in District 1, up near the Notre Dame church.

Serving up a no-nonsense menu of tear-your-head-off coffee (hot or on ice) and simple pots of tea, it was a cafe the likes of which is found all across Vietnam. A family operation with no-frills attached whatsoever. Tiny plastic stools on which to sit, the footpath beside the road being the dining area and service done with a swift, no-nonsense awareness that you just want a drink and not to find out how the barista’s latest film script is coming along.

On this particular day, I opted not to partake of a Vietnamese coffee (aka “an anxiety attack in a glass”) and just had a soft drink. However, the owner, a comely woman of about 60 who wore the fetching pyjama-like matching pant and top attire so beloved of women of her age throughout Vietnam, was insistant that I have a hot drink of some description. Thus I was served a small pot of steaming jasmine tea (in the 30 degree heat).

In the end, the tea went down a treat, but it was the teapot in which it was served that most caught my attention. A battered little silver/aluminium thing, god knows how long it had been knocking about at that cafe. Carrying the signs of age that no intentionally “distressed” item could, I imagined all the hands of all the people who had used it over the years. It could well have been there for 10, 20, god knows, 30 years. Who knows? It could have been there when Saigon fell to the North Vietnamese forces in ’75, the tanks busting through the gates of the Palace, as Neil Davis filmed inside. Who knew?

I didn’t. But what I did know was that, importantly, that teapot had a bloody great “pour”, ie. with the tilt of the pot, the contents felt perfectly balanced and out flowed a perfectly weighted stream of liquid. A physicist trying to invent a calculation for such a thing had nothing on the unknown maker of this little baby.

So, yes, I was very taken with it, and wondered aloud to Simon if I could buy it off the woman. Simon said she probably would sell it and I was more than prepared to pay a few thousand dong for it; it was a beauty. Anyway, I drunk my tea and briefly went to check out the next door clothes store.

Whilst inside, however, I saw Simon call the woman over. He held the teapot in his hand and appeared to be asking her in Vietnamese if she would sell it. The woman looked completely perplexed and it wasn’t because of any lack of proficiency in Simon’s Vietnamese… I later learnt that she couldn’t understand why the hell anyone would want a crappy old teapot that had been used in a roadside cafe for years and years. Such a concept was a mystery to her.

But anyway, a short while later I came back out to my plastic stool, whereupon I was presented with the object of my desire … the teapot. The woman had rinsed it, put it in a plastic bag, and was now handing it over to me. I tried to give her some money, but Simon said she wouldn’t hear of it. “You can have it for free,” she apparently said, or words to that effect.

So there we have it. I got my battered, scuffed and beaten up teapot (with the perfect pour). I brought it back to Bondi and, after a decent rinse, have been enjoying some pretty damn succulent cups of tea from it. And, thus, here it is… 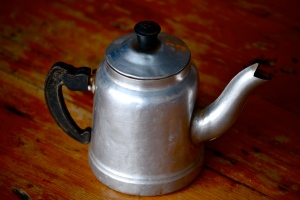 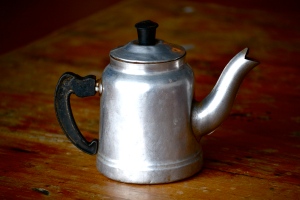